Public utility companies are increasingly faced with the problem of illegal use of the supply media so it became necessary to find a solution that would eliminate this problem.

With a little craftsmanship and ingenuity, fraudsters manage to remove meters or to manipulate them to their advantage, and even to make them run backwards. This leads to enormous economic damage and property damage and often it isn’t clear whether someone has actually manipulated the supply lines.

This is why it became necessary to find a solution that would eliminate this problem.

Security seal is meant for sealing water meters, gas meters, calorimeters or other meters that are connected to supply network with straight connector.

The old solution for this problem, classic lead seals, are unreliable because water activity (moisture) has an aggressive effect on the seal, as well on the wire which seals the meter. This makes it impossible to prove that the meter owner illegaly uses the media.

This why we made our security seals of high grade plastic resistant to aggressive liquids and temperature differences with special closure scheme which doesn’t allow removal or damage of the seal itself. As an additional security we mark the seal with the company name, logo, serial number, bar code, qr code, etc…according to customer request. This way companies can keep their record of installed seals, which prevents the abuse of the seal.

Security seal is made of three parts : ring, safety cap and safety shell, which make handling and installation easier.

Once the security seal is installed it can be removed only by breaking its plastic parts, which is visible.

For ease of spotting attempts of breakage or removal, safety shell is made of transparent material, so every attempt of violent opening is easy to notice.

Security seal is made of high grade plastic resistant to aggressive liquids and temperature differences with special closure scheme which doesn’t allow removal or damage of the seal itself. 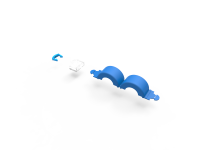